I’ve been a little quiet the last few weeks. Between the new school year, some extra medical appointments, the usual ‘life’ things and training we’ve been pretty busy. But we did make some time Saturday, September 15 in the morning to head down to Toronto to see our wonderful My Team Triumph Canada family and join some of them in the RBC Race for the Kids!

So far, this is the only Toronto race that allows us to start at the front of the pack, and if you are a regular follower here, you will know that front-of-the-pack starts are the safest and best option for the kind of races we do!

Unfortunately, in this case ‘front of the pack’ only means front of the 7K … and since the 15K goes out about half an hour before the 7K, this means that we still ended up running through the back of that group, but the first few minutes of the race were bliss!

This race has a wonderful, festive feel to it, complete with confetti cannons to get us started: 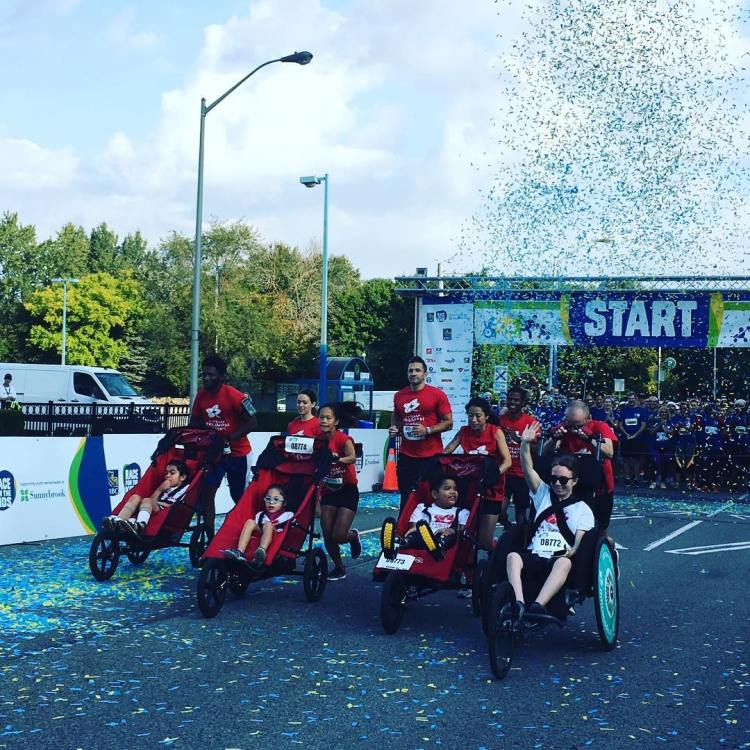 As you can see from this picture, the other captains are using the red stroller-style chairs. Seeing these chairs I was reminded of how important our efforts to raise the money to purchase full racing chairs for My Team Triumph to use for other team captains, as the stroller-style chairs have issues with support and positioning that limits the size and level of disability of the athlete who can use them. Even simple issues with build quality mean that these chairs will last for far fewer races, and will be less dependable. So thank you to everyone that has helped us so far with this fundraiser, and if you haven’t had a chance to donate yet, please consider helping us out!

This was the second time we had competed in this race, so it was interesting to see the difference that a year’s training and a much better-fitting chair had on our results. Aside from the fact that I didn’t have a metal bar digging into the back of my head from the chair frame like last year, there were a few other differences. Last year we had a team of three angels (Trevor being one of them) and although there are two people standing behind my chair, only Trevor ran with me, so I was a single-person-powered vehicle this year. That meant that we had the chance to make a much better race plan this year, based on our intimate knowledge of our training and dialled in to exactly where Trevor was at physically on Saturday morning. And finally, running with my new chair has always been less effort and energy for Trevor – the runner-position is much more customizable and the chair runs exceptionally straight, making a straight, flat, newly-paved road almost effortless to run on. (Too bad there are still hills and potholes in this world!)

We came out of the start with the crew, but quickly began to put some distance between us. No matter how many times we say “we will not go out any faster than 5 min/kilometer” we always seem to struggle to stay at that pace. It’s a real challenge, because Trevor can’t run the whole race at his starting pace, but it’s also hard not to let the excitement get to you when you’re all hyped up and someone launches confetti into the air and gives you a chase car! Saturday, not only did we break a 5 min/k pace, we actually broke a 4 min/k pace for a little bit, which was a little insane!

The race starts in behind Mel Lastman Square, goes south to the bottom of the square, and then zig-zags over onto Yonge St. going south. Just after the 1k mark, we turn around and start heading back north on Yonge St., and this was the point at which we met up with the back of the 15k pack. We were still at the very front of the race, so to begin with the motorcycle and bike lead that we had helped to clear a path in front of us. The general race start had been delayed by two minutes so that we could get off safely, but unfortunately before we hit the 2k mark the fastest male runner from the main race had overtaken us, and we lost our path-clearing team.

This was the first point at which we really noticed the absence of our bigger team of angels. Last year whenever we raced in Toronto we would have one angel pushing and two others clearing a path ahead of us so that we could get through. When we run in Barrie, the crowds are usually thin enough that we can get people’s attention fairly easily on our own. But in Toronto with the larger crowds and peoples’ addiction to running with over-the-ear headphones it is often very difficult to get peoples’ attention when you’re coming up behind them.

That being said, we began our dodging routine and carried on. Yonge St. at this point is a slight incline going north, so we knew that our times would be a bit slower going out, and would be able to speed up on the routine. Our first two kilometers were a 4:25 and a 4:40 split. Kilometer three was up to 5:44, but we had expected that. What we weren’t sure was how things would go after that. Sometimes if we expend too much energy going up the hill (because pushing the chair makes it significantly harder) there just isn’t as much in the tank for Trevor to use afterwards.

But we’ve been playing around with Trevor’s pre-race fuel and decided to give overnight oats a try. It’s just large flake oats mixed with chia seed, hemp hearts, honey, coconut flakes and milk, but we have really noticed a difference in terms of how long he can run for before he’s out of energy, and Saturday was no different.

Once we had crested that hill our times bounced right back! A back-to-back 4:42 and 4:52, followed by a little rise coming back down Yonge St. that gave us a 4:59 and then a blisteringly fast final 4:11 k! I was astounded!!!! Last year, Trevor had said “I don’t know that it will be humanly possible for me to run faster than a 4:30 pushing you” and he managed it on both the first and the last kilometer!

There are some differences between my times and what SportsStats gave us at this point that I’m trying to get resolved, so I’m not certain of our place yet, but our recorded time was 33:33 – an amazing effort! We came in just a few seconds slower than last year when we were a team of four, which is utterly incredible as it means that Trevor effectively put out the effort of three runners!! And it was wonderful to be there at the finish line to congratulate our other myTeamTriumph athletes! 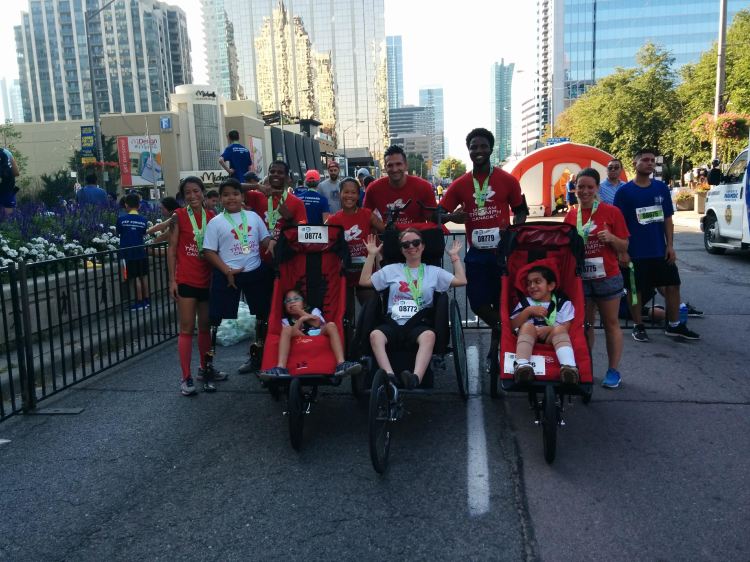