The idea of forgiveness can be very difficult for many people. It had always been drilled into me that it was important to forgive, and I would screw up my eyes and try hard to forgive those who had hurt me, but it rarely seemed to make much of a difference.

Then a couple of years ago I ran across a book by the Rev. Desmond Tutu and his daughter, Mpho Tutu, called, The Book of Forgiving: The Four-Fold Path For Healing Ourselves and Our World. And I figured that since Desmond Tutu had grown up under the horrors of apartheid as a black South African, and overseen the Truth and Reconciliation commission there, he might have something of value to say on the subject of forgiveness.

His book is well worth the read for anyone interested in going deeper, but I do want to summarize his four-fold path here, because I have found it to be so valuable!

He uses the example of the Chartres Labyrinth as a visual for his path.

Which I thought was interesting right away, because a labyrinth is a pattern that you walk – unlike a maze, there are no tall fences, walls or bushes blocking your path, and you cannot get lost. You know where you are at all times on a labyrinth, and yet because of the pattern you trace, you may think you are closer or further away from the centre or the exit than you really are.

Trace the diagram of the Chartres Labyrinth below, to get a sense of the experience. 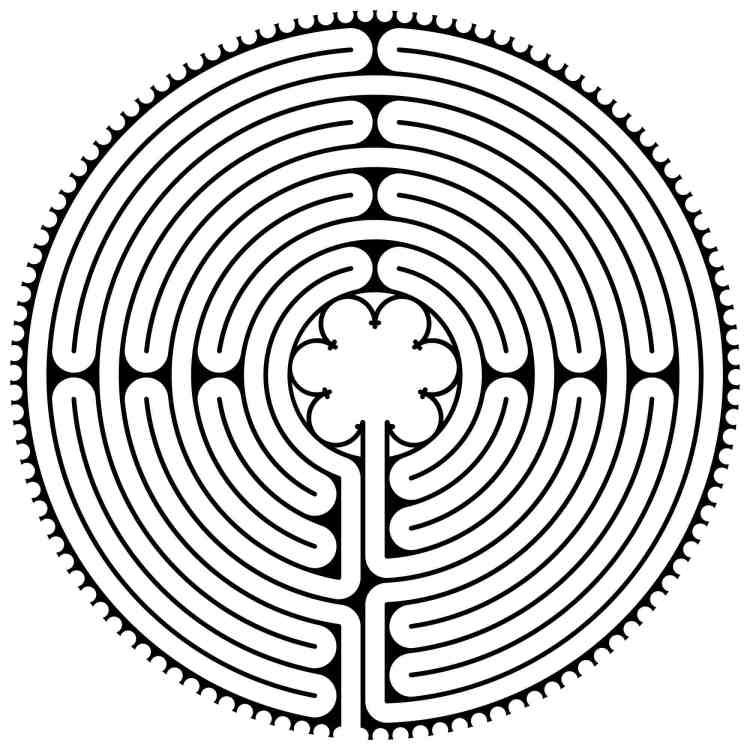 So the Tutu’s say that the first quarter of the labyrinth of forgiveness is spent “Telling the Story”. We can’t do any of the other work of forgiveness if we don’t know what happened. This can be quite difficult sometimes. It is deep emotional core work to tell our stories, and can only be done in a context in which we feel safe.

Once we have told our story, we can move on to “Naming the Hurt”. It might seem like this is simply a repetition of the first step, but this is an important second step. You see, if we are vague about why this story or experience hurt us, then we can’t actually offer forgiveneess, because we can’t properly acknowledge the pain of the experience.

The third step is “Granting Forgiveness”, and now you might be feeling like the Tutu’s are rushing you through. Isn’t there a big jump between naming hurt and forgiveness? They argue that this is the moment of decision. That we either decide in this moment to acknowledge our shared humanity with the other person – acknowledge their experiences and circumstances that caused them to act or react in the way that they did – or reject our shared humanity and lash out in retribution and retaliation. But once the hurt is named – once we feel the heaviness and weight of the harm or the loss – that we have to make a choice.

One of the things that I like about the labyrinth diagram, is that it reminds us that each and every stage in this process is a process. Nothing happens instantaneously. This is not something static, but rather an experience of movement. A shifting and sifting.

Each quadrant of the labyrinth takes time to walk, and as you go along the path, it often feels like you are retracing your steps – though you are always just a little bit away from where you were the last time you had this view. I also love that you have to keep turning and turning, because each turn gains you new insight and new perspective.

From my own experience, this process happens best when you are privileged enough to have a witness for your journey. This is why the Truth and Reconciliation Commission in South Africa was so effective. It is why our Indigenous Peoples use Healing Circles when an injustice occurs in their community.

The witness’ job is to create a place of safety – to ensure that the person going through the process knows that they are not alone.

The witness’ job is also to create a place of being known – that their pain and effort will be seen and acknowledged throughout the process, and treated with confidentiality when the process is completed.

Finally, the witness’ job is to create a place where the person feels precious – where there is no judgment, regardless of what decision they make, and where they know that they are valuable – that they deserve to experience healing from the pain they have had to deal with.

Is there a pain that you need to forgive?

A hurt you need to process?

Do you need a witness for your experience?

Please feel free to get in touch.